The short prologue that opens the 2023 edition will start tomorrow from the "Sea Camp" on the beach on the Red Sea north of the port of Yanbu. The first leg will start on Sunday 1st of January.

The start of the new challenge of the Fantic team at the Dakar 2023 is rapidly approaching: while the verification operations and the final personalized settings are carried out, the pilots of the Fantic trident take care of the last details. The three Fantic XEF Rally Factory, which will be led by Alex Salvini, Tiziano Internò and Franco Picco, arrived by sea embarked from Marseilles at the end of November.

Developed in competition by the Fantic Test Team making use of Franco Picco's experience with par-ticipation in the most severe rally raid competitions such as Dakar, Abu Dhabi Desert Challenge, and Rallye du Maroc, the Fantic XEF Rally Factory is now ready to enter the hardest race.

Total race bike, devoted to the challenge of the desert but at the same time E5 approved production bike, the XEF Rally Factory is equipped with a refined chassis with aluminium bilateral beam frame and Kayaba suspensions. The engine is a single-cylinder 450, as required by the race regulations, twin cams with exuberant power, with a delivery adequately studied for the terrains it will face.

The superstructures and oversized tanks, exactly the same as the series on sale, are designed for a per-fect combination of ergonomic studies and maximum autonomy: the two tanks which have a 30 liters total volume of fuel are positioned in the central and front area, divided in two parts on both sides.

The oil radiator is front mounted for maximum airflow, and the oil filter is oversized with an additio-nal tank. Clamps and hubs are completely made from billet and CNC machining developed. The stee-ring is equipped with a hydraulic damper. The full titanium exhaust was developed in collaboration with Arrow. The tire equipment is Dunlop.

The cockpit is placed on a robust instrument block made of steel and aluminium which contains the roadbook and trip master.

The Dakar 2023, the third to take place in Saudi Arabia, awaits its protagonists with a renewed route, with more competition days, 14 compared to the 12 of the previous one, and a total of 8,549 kilome-ters of which 4,700 of special stages. The longest leg will be the sixth, on January 6th from Ha'Il to Al Duwadimi; the shorter daily fraction will arrive towards the end of the race, on January 13th from the Empty Quarter to Shaybah, which however is part of the longer marahon leg.

It starts from the shores of the Red Sea on the first day of 2023, in the "Sea Camp" on the beach whe-re the techincal verification are taking place and around which the prologue will take place, and whe-re we will return again at the end of the first 603 kilometers leg with a 367 kilometers special stage.

The race will cross the Arabian peninsula diagonally, from coast to coast, offering other “boucle” stages in addition to the first: the caravan will stop in Ha'il from the evening of the 3rd to the morning of January 6th when the competitors will tackle two loop routes, on the 4th and 5th of January, re-spectively 574 and 645 kilometers long. Another loop in Al Duwadimi on the 7th of January, 641 ki-lometres long. The rest day will be in the capital Riyadh on January 9th.

In the eleventh and twelfth stages, on the 12th and 13th of January, the riders will face the marathon stage, without the possibility of assistance, without being able to intervene on the vehicles in the eve-ning and intermediate night: eight hundred kilometers of race, 426.27 plus 376.46, in the sands of the Empty Quarter, in the southeast of the country, in what is defined as the most deserted area in the world!

The last two legs will go up north along the Persian Gulf to reach Dammam on the 15th of January.

This is a Dakar that promises to be truly demanding, a top-level experience that awaits the Fantic team with Alex Salvini, Tiziano Internò and Franco Picco on their Fantic XEF Rally Factory! Good luck to everyone! 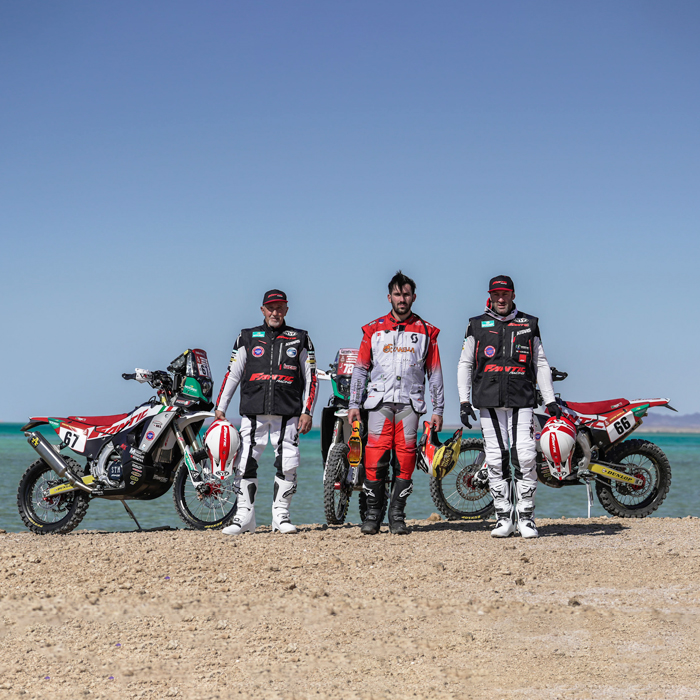