Great performance of the dutch rider who, with a third and a first place in the heats, wins the GP and the red table of leader. Alexis Fueri protagonist of a frightening flight, remains second in the general classification

After the Easter break, the Fantic Factory Team Maddii is back on track in Kegums, Latvia, for the third race of the EMX125 European Championship, while in the MXGP class Nicholas Lapucci did not line up at the start after the injury suffered in the home race in Trentino. The Tuscan rider should be back in the race for the second round of the Italian Championship in Ponte a Egola next week.

In the timed practice Alexis Fueri was not able to find the right feeling with the sandy surface of Kegums and had to be content with the eighth time of his group, while Cas Valk, inserted in group 2, showed an excellent speed that allowed him to finish with the second timed performance.

At the start of race 1, Fueri was very fast coming out of the gate and at the first corner he took the lead, immediately gaining a good advantage over his rivals. Unfortunately Alexis made a mistake when landing the arrival jump, falling violently. Fortunately, Fueri did not suffer any damage from the fall and was able to start the second heat.

Cas Valk, after a bad start, recovered thanks to an incredible rhythm and finished the heat in third place.

Incredible second heat for Cas Valk: the Dutch driver, amazing at the start, at the first bend is already in the lead and, with an unbearable rhythm for all his opponents, he earned a great heat victory.

Alexis Fueri, after Saturday's dreadful fall in race 1, did what he could and, trying not to make any mistakes, finished with an excellent seventh place.

Thanks to this result, Cas Valk won the Latvian GP and is once again the leader of the standings. Fueri, despite the zero of race 1, is still in second place in the standings.

Next appointment for the Fantic Factory Team Maddii in Maggiora for the Italian GP, next 7-8 May.

Marco Maddii comments on the race: "I'm very happy with this weekend and especially with Cas's performance, who rode really well in the second race, perhaps his best race of the season. I'm sorry for Alexis who, however, kept his second place in the championship, yesterday he had a bad crash which could have been an injury, but nothing serious and today he did everything he could. Surely more favorable races will come and he will be able to have his say. The championship is still long and we must stay focused".

Cas Valk: "In race 1 I wasn't able to keep up the pace I wanted so I struggled in the first part of the heat. In the second race, however, I rode very well, I made the holeshot and I'm really happy with the result and I took back the red board". 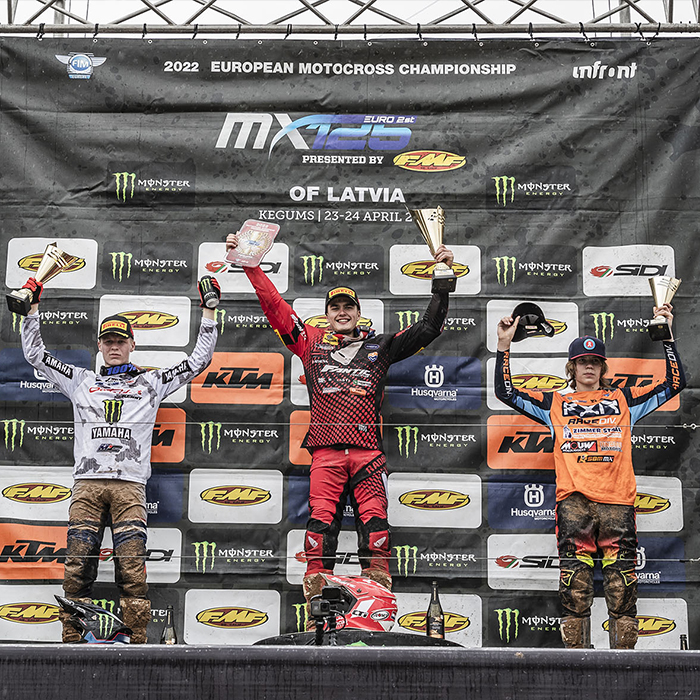